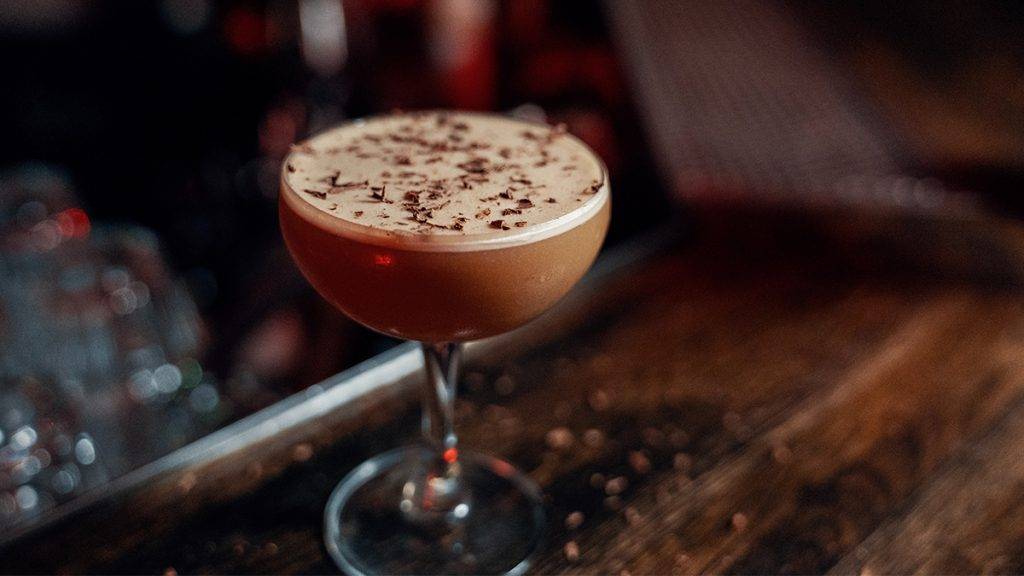 The world famous Irish coffee has a long and storied past, with dozens of theories about its proper recipe and origins. Some believe it was created in 1943 when a PanAm flight from Ireland to New York had to turn back because of bad weather, and a cook who wanted to keep the tired and disgruntled Americans warm, happy, and awake, created a boozy coffee drink for them, sweetened and lighted with cream for the American palate. Visitors to San Francisco often make a pilgrimage to the Buena Vista café, where they believe the drink was born. It wasn’t, but the café’s then-owner Jack Koeppler traveled to the very same Shannon Airport to learn the ropes, ultimately helping the café to make an artform of it, now serving up to 2,500 Irish coffees a day.

As far as we’re concerned, Irish coffee had us at the winning combination of coffee, whiskey, sugar, and cream, so it could come from Mars and we’d still be all about it. This got us thinking: Can you improve upon something that is already pretty perfect? Can you tweak something to introduce subtle differences that unleash the full potential of this humble drink? Fortunately for you, we did all of the dirty work to answer this question, and came up with a complete guide to Irish coffee for all types of enthusiasts.

But first, the basics

The classic recipe for Irish coffee is simple: Pre-heat a footed glass mug with hot water and dump it out. Fill the glass ¾ full with hot coffee. Stir in a spoonful of sugar until fully dissolved, followed by a shot of Irish whiskey. Top off with heavy cream, whipped slightly to thicken and poured over the back of a spoon into the glass.

There are plenty of fun variations on this fundamental recipe, if you like a little whimsy with your coffee and booze. You can also tweak the flavor of the final drink based on what type of whiskey you add. Read on for our top picks depending on your personality and preference.

Of course, you are going to want to make Irish coffee as true to the original recipe as possible, and this naturally means using Irish Whiskey. Irish Whiskey is an ideal spirit for cocktails – including the Irish coffee — thanks to its light, smooth, easy-drinking flavor profile that is a result of the malt — primarily made from barley — being dried in kilns versus open peat flames like Scotch. If you are also a coffee enthusiast who appreciates the different flavor nuances based on bean origin and roasting methods, Irish Whiskey will help lift and compliment rather than overwhelm those coffee aromas with its subtle flavor.

For the kid in all of us

Irish coffee is, by nature, a fun, somewhat indulgent treat — especially if you enjoy it as many of us enjoy our coffee: first thing in the morning, as an afternoon pick-me-up, or an after-dinner drink. So why shouldn’t we get a little creative in our approach to making it? Coffee and liquor are both natural partners for sugary, nutty, chocolate-y things, which explains their role in desserts and sweet treats. Think about exploring some of these complementary flavors when selecting a whiskey for your Irish coffee. There is a whole world of emerging flavored whiskies on the market now, from peanut butter to maple bacon-flavored, so indulge that inner child and treat yourself to something totally decadent.

If you’re someone who likes to buck trends and refuses to stand on tradition — maybe you like red wine with your fish, or you drink rosé year-round, or you really live on the edge and wear white after Labor Day — then you will want to explore the many whiskies coming from non-traditional and emerging regions. Japanese whisky, distilled from barley, has enjoyed a growing reputation for quality and prestige, often upstaging whiskies from more traditional regions like Scotland, Ireland, and America in blind tasting events. Pulling out a bottle of Japanese whisky, or a single malt from India to spice up your next coffee date is sure to get the conversation going.

For the cool and mysterious

You like your coffee black, and your whiskey smoky. Certain whiskies are naturally smokier than others, thanks to the grain they’re made from, where they’re made, or how they’re distilled. Rye whiskey is made from — you guessed it — rye, and tends to be spicier and smokier than its counterparts. It is often quite dry, which makes it a perfect counterbalance to the sweetness of a traditional Irish coffee made with sugar.

If you like things really smoky, head on over to the Islay region of Scotland, where sea-salt-infused peat moss is used to dry the barley malt, resulting in the unmistakable briny, smoky, “peaty” flavor profile of the whisky from this area. We can’t think of a more brooding, enigmatic partner for a strong cup of joe. Cigar sold separately.

If your dream scenario sounds like curling up on the couch with a good book, some Billie Holiday, and a cashmere throw, then your version of an Irish coffee probably includes all of the most luxurious elements: a silky sweet Bourbon or a smooth and elegant Speyside or Highland Scotch, single-origin blonde roast pour-over coffee sweetened with raw sugar or agave syrup, and hand-whipped heavy cream. Bourbon is primarily made from corn (it must be made from a minimum of 51%, with no added flavoring or coloring ingredients to call itself Bourbon) and aged in charred oak barrels, resulting in classic vanilla, oak, and caramel notes, making a natural partner for coffee and mocha flavors.