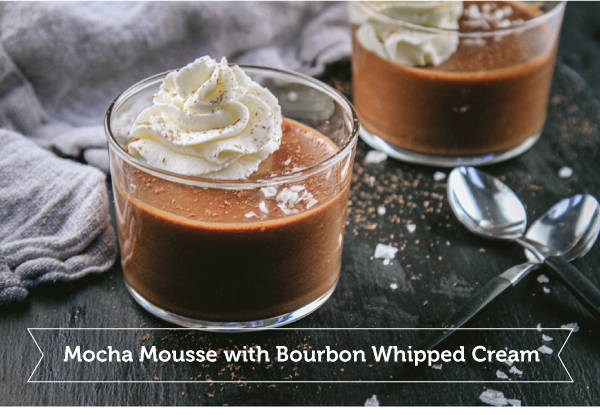 Light and airy, yet densely rich, the contrasting character of mousse creates a magical ending to any meal. Consider

making mousse your signature dessert! With a few key ingredients and specific techniques, each bite will elicit a chorus of ooh's and ahh's. A sweet ending perfect for this Valentine's day!

1. In a stand mixer, or with a bowl and hand mixer, beat the egg yolks and 2 tablespoons of the granulated sugar until

fully incorporated. The mixture will change color becoming a lighter yellow, and will about double in volume.

Be careful NOT to boil the whipping cream. Pour the hot cream into the egg mixture slowly in a thin stream on low

speed, (or while continually whisking) until combined. The slow stream and continuous movement will help keep the

eggs and mixture from curdling.

3. Return the combined egg and cream mixture back into the saucepan. Over low heat, stir constantly until thickened

into a custard, and the mixture reaches 160 degrees F. Take care NOT to boil the mixture. The mixture should be thick

enough to coat the back of a spoon.

4. Remove the mixture from the heat, and stir in the espresso, vanilla extract, and the chocolate chips. Stir until the

chocolate is fully melted. Let the mousse base cool slightly.

5. Prepare the egg white mixture. Set up a large heat-safe glass or metal bowl over a saucepan with simmering water

(this set-up is also a version of a bain-marie). Add the egg whites and remaining 2 tablespoons of sugar to the glass

bowl. Whisk until the sugar has dissolved and the mixture reaches 160 degrees F. Then, using a stand or hand mixer,

beat the egg white mixture until soft and shiny peaks are formed.

6. Mix in about one third of the egg white mixture into the mousse base. Stir until combined. Then, gradually fold in the

remaining egg whites taking care to keep as much airiness in the mixture as possible.

7. Prepare the whipped cream. Whip the remaining heavy cream in a cold mixing bowl until stiff peaks begin to form.

Next, carefully fold the stiff whipped cream into the mousse base until fully incorporated and smooth.

8. Dish the mousse by spooning into small ramekins, silicone molds, or dessert dishes. Cover and chill for at least 4

9. Prepare the gelatin. Stir 1 teaspoon of unflavored gelatin with 4 teaspoons of water until combined. Let the gelatin sit

for 5 minutes until the granules are all well-dissolved. Heat in the microwave for 5-10 seconds, and then stir in 1 tablespoon

of the whipping cream. Mixing the gelatin with a little cream will help the gelatin incorporate more easily into the

whipping cream in the next step. Whip the cream. Combine the whipping cream, powdered sugar, bourbon and vanilla

extract and whip with a stand mixer until soft peaks are formed. Slowly drizzle the gelatin mixture into the whipped

cream while continuously mixing. The whipped cream is finished when stiff peaks are formed. Be careful to not over-mix

-- it can change from whipped cream to butter in just a few seconds!

10. Serve with a sprinkle of flake salt, grated dark chocolate, and a swirl of bourbon whipped cream.